Mounted on top or standing beside an animal many times their size and weight, it’s contestant against beast. In these events, the contestant attempts to out balance or out maneuver the animal’s natural instinct to rid itself of an unusual weight on its back or to escape from the clutches of the contestant. These events require a great deal of skill and experience before a contestant can become a champion. Each KSGRA holds at least one rodeo school before a rodeo or during the year, where experienced competitors can give the new contestant good instruction and suggestions as to how to improve. 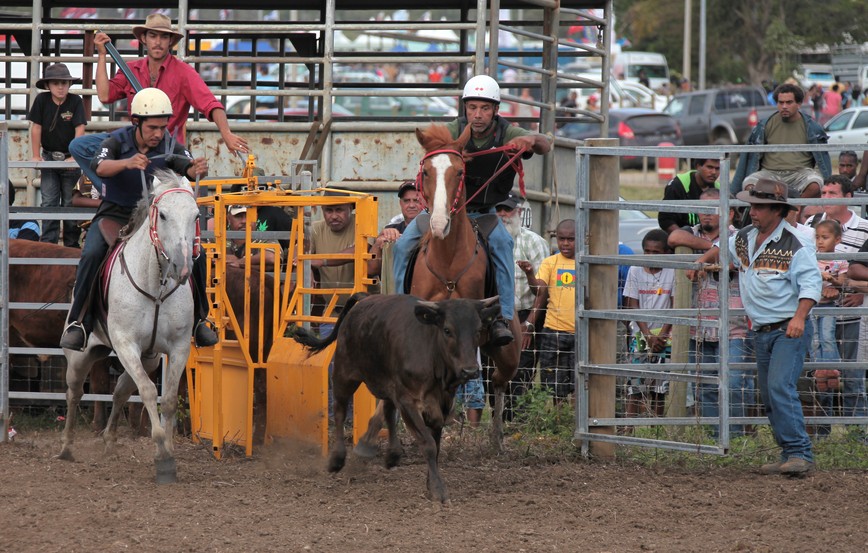 This is a good beginner’s event, but it’s not as easy as it looks. Steers are male cattle which have been castrated. The rider has a “bull rope” wound around the animal just behind the front legs and then around the rider’s hand; no knots are allowed. This hand hold and the riders legs, wrapped around the animal, are all the rider has to count on to stay on top. A rider who is able to spur, or move their legs back and forth on the animal’s sides, will receive a higher score.

Gay rodeo presents three roping events with one designed for beginners. The other two can be costly, because your success depends on a very good horse. Many roping horses sell for $10,000 and up. These events always begin with the contestant in a “roping box.” An imaginary start line runs across the front of the roping box and the chute where the calf or steer is held. Should the contestant cross this line, called the “barrier”, before the calf or steer clears the chute, a 10-second penalty shall be assessed and added on to the time.

This is the second step in a roper’s career. Most beginning ropers practice on fence posts or other stationary objects and then move in to the arena with a live animal. The contestant stands in the roping box and when the calf is released, attempts to throw the loop over the calf’s head. Once the loop passes over the calf’s head, the contestant must pull up the slack in the rope.

The roper is mounted on horseback with one end of his or her rope tied to the saddle horn by a piece of string. When the calf is released from the chute, the roper will be in hot pursuit with lasso swirling above his or her head. When the loop is thrown, it must pass completely over the calf’s head. As the calf pulls away from the rider and horse, the rope grows taut and will break away from the saddle horn.

Speed and agility are two highly prized qualities in these contestant’s horses. These three speed events pit the horse, under the skillful hand of its rider, against the clock. Negotiating the prescribed pattern is a test of the rider’s skill and the horse’s speed and agility. A running start is permitted in these events and the fastest time wins.

Contestants vie for the fastest time in running a 3 point, cloverleaf pattern around three barrels. The horse and rider are allowed a running start and time begins and ends upon crossing a visible starting line. A 5-second penalty is assessed for knocking over a barrel. The pattern can be started either from the left or right, and contestants that go off the prescribed course are disqualified.

In this event, horse and rider compete for fastest time working a linear pattern through six equally spaced poles. The poles must be at least 6 feet in height and spaced 21 feet apart. A running start is allowed and a 5-second penalty will be assessed for knocking a pole down, and disqualification will take place if the team goes off course.

A triangular pattern similar to that of the barrel race is used, with the substitution of a pole in place of barrel number three. The two other barrels will have a bucket that is 3/4 full of rabbit pellets placed on top of it, and a flag in one of these buckets. The rider may choose to run to the right or left and as they pass the first barrel, they pick up the flag, race past the pole, back to the second barrel, and attempt to place the flag in the second bucket. If the rider knocks over the first bucket or the pole, a 5-second penalty will be assessed. If the rider does not pick up the flag or misses the second bucket, no time will be given. If the second bucket or barrel are knocked over, the rider is disqualified. Sounds easy, but try this at 30 plus miles per hour!

Whenever a group of cowhands get together for a good time, hell is going to be raised! Cowhands generally have their own definition of fun and challenge. After a few beers and some serious ego pumping, it is amazing what a group of hands can come up with! Prerequisites for participation are a willingness to eat dirt and the ability to hold your own with an ornery steer or goat. Sixty percent of gay contestants get their start in these three events and the old-timers stay in because the payoffs (or winnings) are the best of all events.

This two-person event was created specially for gay rodeo. The team stands 50 feet from the point where the goat is tethered. One of the team members has a pair of jockey-style underwear worn over their forearms. When the whistle sounds, the team runs to the goat. The team member without the underwear picks up the goat’s rear hooves, grabs the underwear from around the other member’s arms, and pulls it up the legs of the goat. Both team members must then race back to the start/finish line and cross the finish line to stop the time. The underwear must stay over the goat’s tail bone until the timer is tagged by both members.